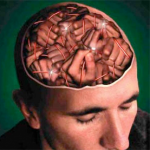 Most people know about the -Fight or Flight- response: (The fight or flight response occurs in a situation of intense fear or stress in which a biochemical/physical reaction occurs in humans and animals. This reaction consists of an arousal of the sympathetic nervous system to enable the archaic response of either a fight or flight.) However, there is a third less known reaction which is the FREEZE response. The freeze response occurs in a traumatic or overwhelming situation. In this reaction the person feels innate, unable to move, react, run away or fight.  The person feels as if they are frozen or paralyzed. An event in the past that was very overwhelming, upsetting or stressful can lead to such a freeze response and stay with a person for years. These individuals have consciously put the situation behind them, do not think about it anymore or do not want to be reminded of it however, they continue to experience anxiety and other ill feelings. It is almost as if they have remained ‘stuck’ in their frozen response to the initial trauma. This response will not allow them to experience their presence in an intense, wide ranged or varied manner. It is almost as if the hues of color, the tastes of food, the sweet smell of flowers or the touch of their senses cannot be fully experienced anymore. Life has to be lived in a remote, distanced, detached manner in order to feel safe and secure. Inside they remain trapped in a box of frozen pain.

The initial trauma determines how the person deals with his/her present relationships, sees him/herself and the world, or understands their day to day experiences.  It is almost as if they have lost their ability to fully live their presence. It is as if they stopped at a certain point, and there is no more growth, little new thoughts or creativity to be felt. If these individuals are confronted with new conflicts or challenges, they seem to revert to earlier ways of resolving their issues and thus re-enter constantly into renewed conflicts. The psychobiological effects of the past trauma carry changes in the neuro-chemical response to stress including the intensity and magnitude of the catecholamine response, the cortical and serotonin response, as well as the endogenous opioid system.

The goal of treatment is to help these individuals find a way in which they can acknowledge and recognize the physical reality of the past, the emotion of the past and the perception of the past without having to re-experience the trauma all over again. For this to happen, it is not sufficient to just uncover memories of the past. Memories have to be modified, transformed and reconstructed into new stories. Individuals have to learn within a safe therapeutic relationship a new view which they help actively create in the therapeutic process. There will be new connections made, new understandings developed and new physical and emotional ways constructed that will ultimately allow the presence to emerge in a more dynamic, flavourful and positively intense manner.

The goal of a past freeze response treatment has three main components: 1) processing the initial trauma that led to the  response and opening it up to new connections 2) understanding and  mastering physiological, biological and emotional reactions, 3) re-establishing new connections and interpersonal efficacy. The individual learns to move from experiencing the presence as if it was stuck in the past to being present in the here and now, and live in their fullest potential.

Psychotherapy helps to befriend the unacceptable, the terrifying, the overwhelming and move it into a manageable order of things. The belief system of a person will be re-constructed and re-created through a combination of procedures to allow for more effective coping. At the end the trauma can be told without actually re-experiencing it. Psychotherapy addresses the building of new relationships, the capacity for trust and openness, the ability to understand and negotiate personal needs and longings, and the ability to establish secure relationships with feelings of closeness and intimacy.

Once the frozen response is loosened up, the past can be placed to rest, and the impact of the past on the presence is reduced and the presence can enter into the individual’s life.